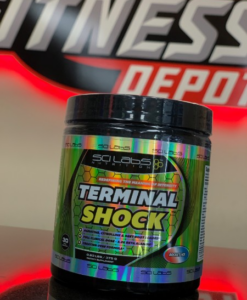 The new and reformulated Terminal Shock offers you a pre-workout formula designed to increase your body energy and the intensity levels previous to physical effort and workouts. Terminal Shock is not the classic over caffeinated formula and “pixie dust” proprietary blends without any real value, but a powerful product formulated to lead competition in all it´s areas: focus, strength, push, energy levels and resistance. There is no need to combine 3 different products to obtain a perfect combo, here you have it all in one.

Test-A Shock is probably the most effective and natural testosterone booster available in the market nowadays.

Performing Bulbine Natalensis, a potent African root extract from Southern and South Eastern Africa that has traditionally been used as an aphrodisiac as well as some other beneficial properties. Due to its influences on cognition and sexuality, it is currently being investigated for its effects on testosterone. Three separate studies looking at serum testosterone levels note significant increases in circulating testosterone, and one study noted a decrease in estrogen levels as well. LH has been shown to be increased with Bulbine Natalensis, and appears to be more drastic over time rather than an acute effect

Loaded with other ingredients, like Tribulus terrestris, Epidemium Extract, Rhodiola Rosea and Fenugreek extract among many others, Test-A Shock is by far, the most natural and at the same time, safest choice for those that want to rise up naturally their testosterone levels.